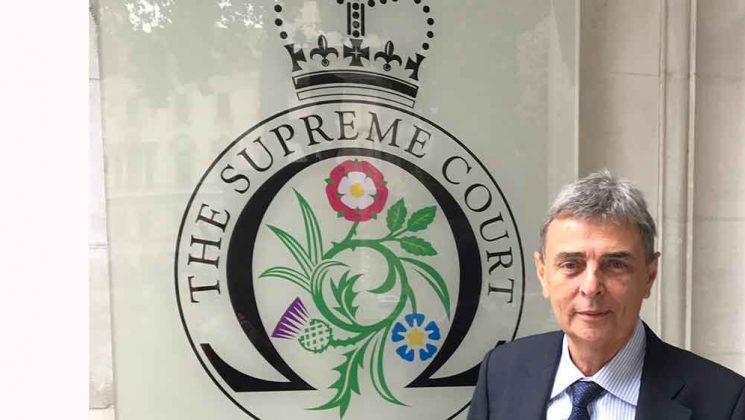 Employment tribunal fees will be scrapped after UNISON won a landmark court victory against the government this morning.

The Supreme Court – the UK’s highest court – has unanimously ruled that the government was acting unlawfully and unconstitutionally when it introduced the fees four years ago.

From today, anyone who has been treated illegally or unfairly at work will no longer have to pay to take their employers to court – as a direct result of UNISON’s legal challenge.

The government will also have to refund more than £27m to the thousands of people charged for taking claims to tribunals  since July 2013, when fees were introduced by then Lord Chancellor Chris Grayling.

Anyone in England, Scotland and Wales wanting to pursue a case against their employer has had to find as much as £1,200. This has been a huge expense for many low-paid employees, says UNISON.

Reacting to this morning‘s decision, UNISON general secretary Dave Prentis said: “The government is not above the law. But when ministers introduced fees they were disregarding laws many centuries old, and showing little concern for employees seeking justice following illegal treatment at work.

“The government has been acting unlawfully, and has been proved wrong – not just on simple economics, but on constitutional law and basic fairness too.

“It’s a major victory for employees everywhere. UNISON took the case on behalf of anyone who’s ever been wronged at work, or who might be in future. Unscrupulous employers no longer have the upper hand.

“These unfair fees have let law-breaking bosses off the hook these past four years, and left badly treated staff with no choice but to put up or shut up.

“We’ll never know how many people missed out because they couldn’t afford the expense of fees. But at last this tax on justice has been lifted.”

UNISON assistant general secretary Bronwyn McKenna added: “The Supreme Court correctly criticised the government’s failure when it set the fees to consider the public benefits flowing from the enforcement of legal rights enacted by Parliament.

“The effective enforcement of these rights is fundamental to parliamentary democracy and integral to the development of UK law. UNISON’s case has helped clarify the law and gives certainty to citizens and businesses in their everyday lives.”

The decision marks the end of a four-year fight by UNISON to overturn the government’s introduction of fees.

Employment tribunal fees were introduced on 29 July 2013 and started at around £160 for a type A claim, such as wage claims, breach of contract, and £250 for a type B claim, covering issues such as unfair dismissal, race and sex discrimination.

There was also a further hearing fee of £230 for Type A and £950 for Type B claims. Appeals at the employment appeal tribunal attracted an additional £400 lodging and £1,200 hearing fee.

The judges also said fees were set so high, it “has had a deterrent effect upon discrimination claims, among others”, and also put off more genuine cases, than the so-called vexatious claims the government claimed fees were meant to deter.

Read earlier reports about the case

The Supreme Court stressed that the administration of justice is not merely a public service, where courts and tribunals are only of value to the “users” who appear before them and who obtain a remedy.

It said access to justice is of value to society as a whole, especially where cases establish legal rules and principles of general importance.

The Court said UNISON’s evidence showed the fall in claims when fees came in was “so sharp, so substantial and so sustained” that they could not reasonably be afforded by those on low to middle incomes.

It also held that fees particularly deterred the kind of ‘low-value’ claims generally brought by the most vulnerable workers.

Time to claw back on Pay - vote YES for Action!

Your pay is worth far less now than ten years ago after years of pay restraint and inflation.

Local government workers are seeing their living standards squeezed as the prices of food, gas and electricity, travel and childcare continue to rise. This can not continue – you deserve more. You deserve fair pay.

Use the leaflets and posters on the right of this page to build the campaign in your workplace.

What’s not fair?
While inflation indexes show how costs are rising, the impact on individual households is often worse. This cannot continue.

The employers have offered:

• Scottish Local Government Living Wage is the minimum pay for all pay and allowances including additional hours, contractual overtime and other allowances. It will be pensionable.

What is fair?
The employers’ offer falls far short of our claim. We asked for:

• The continued uprating of the Scottish Local Government Living Wage.

• A future pay strategy to identify and redress the imbalance caused by previous pay awards below the rate of inflation.

How do I vote?
UNISON recommends that you vote YES for strike action. Ballot papers along with a pre paid return envelope will be sent directly to members home addresses. If you do not receive a ballot paper then call the Ballot Helpline 08000 857 857 which will be open from 17 May – 25 May.

Am I being asked to strike?
Yes. This is a formal industrial action ballot. The consultative ballot that you previously took part in returned a very firm rejection of the employers offer.

What action might I be asked to take?
This will be determined by UNISON’s Scottish Local Government Committee later this month however it is likely that any programme of action will commence with a single day of action for all members.

Members should have received notice of the result of the 2017 Pay Campaign Ballot on Industrial Action.

The result was a 62% Yes vote for action. Unfortunately, at 22.8%, the turnout was just too low to even contemplate a challenge to the New Anti-Union legislation that only allows legal industrial action on a turnout of 50% or more.

We should still welcome the fact that so many members who responded were prepared to fight over pay and take that forward into future negotiations.

Clearly, however, we need to find ways to convince more of our members of the need to participate in the democratic processes of the union. We simply cannot afford to carry on watching our pay being outstripped by rising prices year on year.

UNISON NEC Elections: Have your say – don’t throw those papers away!

Who runs your union? Whoever we, as members, elect to run it.

Elections for all of the seats on your union’s National Executive Council (NEC) started on Monday 3 April and will run until Friday 28 April.

UNISON’s NEC is elected every two years and has responsibility for deciding policy on important questions impacting members across the whole of our 1.2 million member union in England, Scotland, Wales and Northern Ireland between annual conferences. It also is responsible for implementing decisions taken by UNISON’s National Delegate Conference each June.

Your branch committee has nominated the following candidates who we feel will reflect the key key demands we feel our union must move forward with:

In addition, our branch has made the following eight nominations including for the newly created NEC positions specifically reserved for disabled members:

Ballot papers should have gone to members’ home addresses from 3 April. If you’ve not received a ballot paper by Tuesday 11 April, then please contact the ballot helpline through UNISONdirect on 0800 0857 857. Please don’t contact the branch office in this regard.